In recent years, in large shopping malls or activities, we can always see the figure of "LED fan". Its appearance is like a fan, but it can display a variety of patterns when rotating. Some can display dynamic 3D patterns, which are very cool. Whenever you see them, people can always stop to watch and play a very good role in publicity and promotion. So how does the bright LED fan display patterns? Strictly speaking, this so-called "fan" is just a vivid name. In fact, it is a kind of "rotating LED light bar", and its professional name is holographic 3D smart screen. After being electrified, the "fan blade" starts to rotate, which can present 3D images while rotating, which is cool and realistic. At the same time, according to the size and color of the pattern, the LED fan can well hide its fan blades. Because there is no border or fixed screen, the dynamic picture is like floating in the air, which is very realistic. The 3D smart screen not only uses the hardware of rotating LED, but also makes use of the visual persistence of human eyes. For the hardware configuration of rotating LED, simply speaking, it is to calculate the change frequency of LED light according to the rotation speed of the "fan blade". When different LED lights are lit at different times, different patterns will appear. The so-called visual persistence phenomenon refers to that when the human eye is observing the scenery, the light signal is transmitted to the brain nerve, which takes a short time. After the effect of light ends, the visual image does not disappear immediately, and the human eye can still keep its image for about 0.1-0.4 seconds. This residual vision is called "afterimage", and the phenomenon of vision is called "visual persistence".

Generally speaking, one or more strings of LED lights are arranged on the fan blade. Here, it is assumed that there are 20 LED lights, and the number is 1-20 from the axis to the edge of the fan blade. In order to explain the principle briefly, we assume that when the speed of the fan is 60 cycles per minute (the real situation is much higher), the visual persistence phenomenon will appear. We assume that the LED light is 0 degrees above the fan at 0 seconds. If you want to display the effect of 6:00 on the fan, the minute hand needs to point straight up and the hour hand point to the bottom. It is necessary to light up the minute hand from No.1 to No.20 at 0.5 second, the hour hand from No.1 to No.10 at 0.5 second, the minute hand by minute hand at 1-20, the hour hand by hour hour hour at 1.5 second, and so on, so that the human eye can receive a complete picture of the clock at 6:00. For complex patterns, LED fan will have more complex structure and programming. Through the combination of LED light bar rotation and visual persistence phenomenon, people can see the rotating LED fan will appear a dynamic 3D picture.

What is a 3D holographic fan screen?

3D Holographic fan screen: using the principle of keeping the human eye in the rotation of LED light bar, it can make people feel that the products in the fan screen are floating in the air. It's 3D with your eyes, no borders, no background. Suitable for all kinds of shopping malls, KTVs, cinemas, chain stores, etc. Advertising, novelty, and attention.

Convenient installation - 3D holographic system can modify the hardware system and structure according to the existing building or installation location space, which is conducive to permanent installation in various buildings and urban spaces.

Content diversity - 3D holographic system can change digital content at any time according to demand, our team is professional

Chemical operation will be the strong backing for your perfect display.

Because it has no frame and background, it makes the user feel that the image is three-dimensional floating, so it is called holographic fan screen. 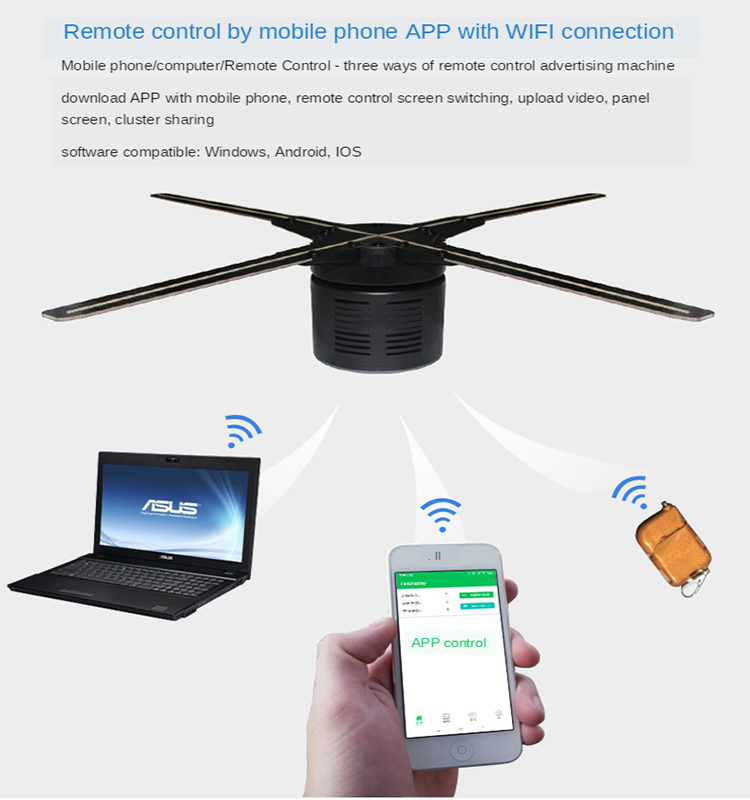 The technical principle is divided into two parts

One is the display part, which generates a display plane by high-speed rotation of LED light bar;

The mechanism is that when the LED light bar rotates at a high speed, the video is played, which makes use of the human visual persistence phenomenon to produce a plane continuous image effect. From the perspective of the audience, we can see a picture with a strong three-dimensional sense, and completely ignore the fact that led light bars exist. For example, when we look at the rotating fan, we can't see the fan blade; 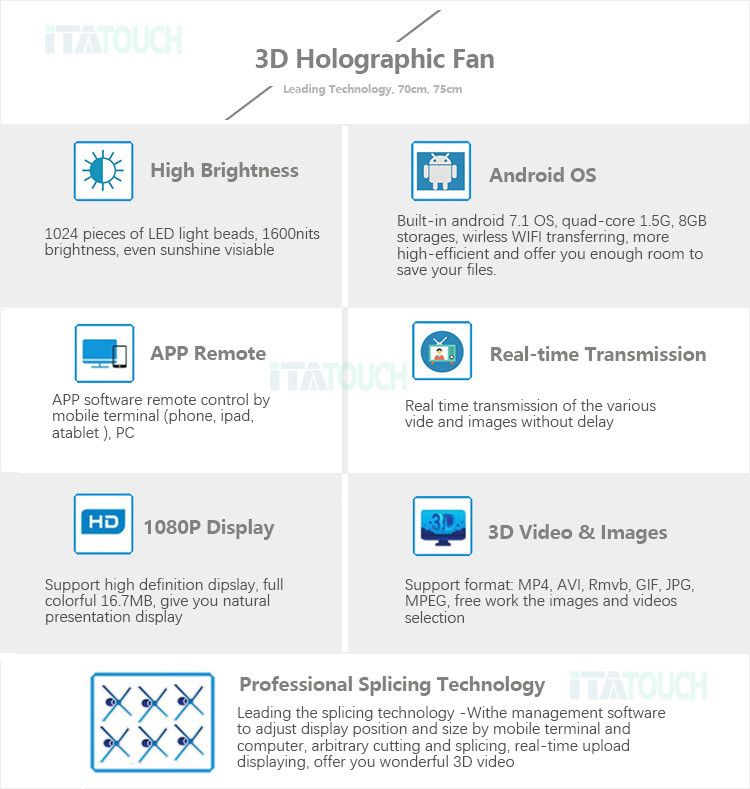